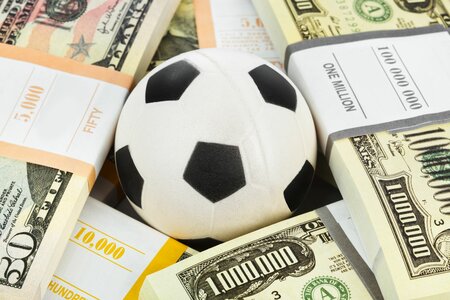 Why was Neymar able to transfer to Paris Saint-Germain for 222 million euros last summer, against the will of FC Barcelona, and thus get out of an ongoing employment contract? The clubs have very limited possibilities to prevent such excessive transfers and the Financial Fair Play of the UEFA is so far pretty toothless.

Gone through the ceiling
British TV money and foreign investor capital have now so inflated the players market in European professional football that transfer fees in the tens of millions are the order of the day and often justify little more than a side note. Last year's transfers of Brazilian superstar Neymar and French mega-talent Kylian Mbappé to Paris Saint-Germain for a total of more than 400 million euros have, however, even in the grotesque illusory world of European top-football blown apart the previous framework and ushered in a new era in the transfer market. It will therefore be interesting to see how deeply the top European top clubs are willing to dig into their pockets after the World Cup to acquire the new super stars or mega talents.

Since the Bosman ruling of the European Court of Justice in 1995, which stipulated that football professionals are allowed to change clubs after expiry of their employment contract for free, it has become customary for players to change clubs before the expiry of the fixed-term employment contract, as this is the only way a club can demand a transfer fee and profit financially from a player's switch to another club. However, it can be very attractive for a player to wait until the end of the contract before changing clubs. This gives him the opportunity to collect at least part of the potential transfer fee as a signing bonus. This also explains why clubs extend the contracts of players who are willing to transfer, prematurely and at significantly better conditions, in order to collect a transfer fee.

Limitation of transfer fees?
Due to the steady increase in transfer fees over recent years, the voices demanding an end to, or at least a limitation of, the transfer madness have become louder. However, most European legal systems, including the Swiss, do not offer any options. The associations can refer to the legal principle of contractual freedom, and therefore the amount of the transfer fee remains a matter of negotiation, in which the legislator generally cannot interfere.

Only the football associations at national or continental level, as well as FIFA, have the possibility to include mechanisms in their regulations to limit transfer fees. So far only UEFA has tried to make use of its possibilities.

Financial Fair Play
UEFA tried to stop the excesses on the European transfer market by implementing Financial Fair Play (FFP) 2015. The FFP is a UEFA regulation on club licensing for European club competitions which, among other things, regulates the legal and financial criteria that clubs must meet in order to participate in UEFA competitions. In particular, UEFA wants to use the financial criteria in the FFP to prevent the increasing indebtedness of European football clubs.

Financial Fair Play works as follows: The relevant balance sheet values of the clubs are reviewed for the last three years. During this assessment period, the relevant revenue must at least have offset the relevant expenditure. If this is not the case, the previous year is also included in order to determine whether, at least, a positive development is discernible.

If the relevant expenditures exceed the relevant income, the difference (currently no more than €45 million) can be offset by private lenders or investors, but if this does not happen, the club violates the FFP. If the deficit exceeds the maximum amount of €45 million, the club is also in violation of the FFP. The maximum amount of this deficit is to be renegotiated at the end of this year. The aim is to reduce it to zero.

The clubs have agreed with UEFA that if they violate the FFP they may be sanctioned. Sanctions include, but are not limited to, warnings, fines, point deductions in UEFA competitions, transfer bans, expulsion from UEFA competitions and removal of titles.

In practice, the FFP has so far proved to be a rather toothless instrument, punishing smaller clubs in particular, while effective sanctions (such as a one-year exclusion from the Champions League) against the, mainly responsible, top clubs have so far failed to materialise.

Admissibility of non-competition clauses
Against this background, clubs may be willing to impose contractual non-competition bans on their players so that they do not switch to a competitor. However, this is not permitted under Swiss law: On the one hand, footballers have no insight into their employer's clientele or manufacturing and trade secrets and so already a basic prerequisite for a valid prohibition of competition according to Art. 340 CO does not exist. On the other hand, professional athletes (in contrast to other professional groups) have a fundamental right to be employed by their employer, as the market value of such employees would fall rapidly in the event of prolonged inactivity and their economic advancement would be at particular risk. This right to employment would be circumvented by a contractual prohibition of competition at the end of the contract term. For the same reason, garden leave of a professional footballer is also problematic.

Please do not hesitate contacting our sports law department, if you have any questions.