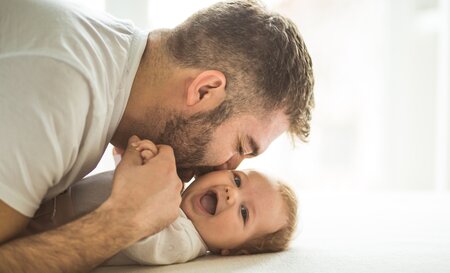 In future, fathers will have a statutory right to two weeks' paid paternity leave. The Swiss voters accepted the corresponding bill in the vote on 27 September 2020.

In the context of equality, calls for more generous parental leave models have been growing louder for some time. Paternity or parental leave has already been the subject of various parliamentary debates and initiatives in recent years, with the aim of also granting fathers the right to paid leave after the birth or adoption of a child.

While working mothers are legally entitled to a minimum of 14 weeks' paid maternity leave after the birth of their child under the Swiss Code of Obligations and Federal Act on Compensation for Loss of Earnings (article 329d of the Swiss Code of Obligations [CO]; article 16b of Federal Act on Compensation for Loss of Earnings [EOG]), fathers were previously not legally entitled to paid paternity leave. According to the current legal situation, a father can claim one or two days of paid paternity leave after the birth of his child pursuant to article 329 para. 3 OR within the framework of the "usual hours and days off". However, many employers in both the private and public sectors already voluntarily grant young fathers more than the statutory minimum.

The bill drafted for this purpose was adopted by parliament on 27 September 2019. Subsequently, the initiative submitted was withdrawn by the initiative committee. The referendum raised against it was rejected by the Swiss voters in the vote of 27 September 2020, thus approving the bill on two-weeks' paternity leave. The amendment is expected to come into force at the beginning of 2021.

Who is entitled to paid paternity leave?

The entitlement to compensation for loss of earnings during paternity leave also requires, like maternity allowance, that the father (i) was compulsorily insured within the meaning of the Federal Act on Old Age and Survivors' Insurance (AHVG) for nine months immediately prior to the birth of the child, (ii) was engaged in gainful employment for at least five months during this period and (iii) was an employee or self-employed person at the time of the birth of the child.

How much is the financial compensation?

The two-week leave corresponds to 10 working days. Accordingly, fathers are entitled to daily allowances from the compensation scheme for loss of earnings for 14 calendar days. As with maternity allowance, the daily allowance amounts to 80% of the father's average earned income before the birth of the child and is limited to CHF 196 per day.

When can paternity leave be taken?

Analogous to maternity leave, article 329 para. 3 CO provides that the father's entitlement to annual leave may not be reduced due to the paternity leave taken.

Does paternity leave have to be taken?

However, an employee cannot waive the exercise of this right, for example by making a contractual commitment not to take paternity leave. As this is a so-called partially compulsory right, the statutory provision can only be contractually amended in favour of the employee.

It should also be pointed out that paternity leave must be taken effectively, otherwise it lapses. Consequently, financial compensation in lieu is not permitted.

Extension of the period of notice

If an employer terminates an employee who is entitled to paternity leave in accordance with article 329g CO before the end of the employment relationship, the notice period is extended by the days of leave not yet taken.

As with maternity allowance, paternity leave is financed on a parity basis by means of wage contributions under the existing compensation scheme for loss of earnings. The contribution rate for employees and the employer will be increased from currently 0.45% to 0.50%.

The final word on maternity, paternity and parental leave has not yet been spoken. Many consider the legal introduction of two-week paternity leave to be a step in the right direction in terms of equality and work-life balance. There is, however, a growing trend towards extending birth-related leave. Currently, the demands for paid parental leave are becoming louder and louder.