Limitation Initiative: Setting the Course for Switzerland's Future Relations with the EU 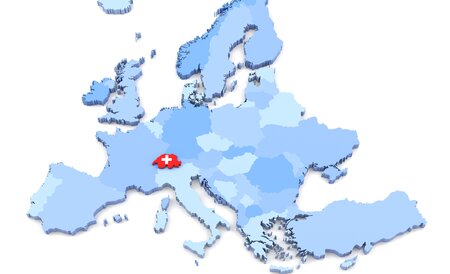 On 27 September 2020 the Swiss people will vote on the initiative "For moderate immigration (limitation initiative)". The initiative came about because the initiators represent the view that the "mass immigration initiative" adopted in 2014 has not been properly implemented.
The initiative demands the annulment or termination of the agreement with the EU on the free movement of persons. As a result of the abolition of the free movement of persons, the stricter provisions of the Foreign Nationals and Integration Act (FNIA) would then also become the basis for how EU/EFTA nationals would be treated in terms of their foreigner law regulations. Moreover, adoption of the initiative would probably endanger the relationship with the EU as a whole.

The motive of the initiators was the fear of excessive immigration, which could lead to rising unemployment and thus endanger Switzerland's prosperity. Opponents of the initiative argue, however, that direct access to the European market for Swiss companies, as guaranteed by the agreement, is indispensable.

The initiative calls for independent regulation of the immigration of foreigners in Switzerland without free movement of persons. The Federal Council is expected to negotiate the suspension of the Agreement on the Free Movement of Persons with the EU (FMPA). Should they not succeed within twelve months they must terminate the FMPA within 30 days. Furthermore, according to the initiative text, even new international treaties may not grant free movement of persons.

The Federal Council considers it unrealistic that the EU would adopt a corresponding negotiating mandate for the repeal. Accordingly, it would have to be anticipated that the FMPA would have to be terminated unilaterally by Switzerland after the expiry of the deadline.
Abandonment of the Dual System in Switzerland?

At present, Switzerland has a dual system for issuing work and residence permits. Foreigners from EU-28/EFTA countries have easier access to the Swiss labour market thanks to the Agreement on the Free Movement of Persons. The Free Movement of Persons grants an unconditional legal right to immigrate to Switzerland as long as certain requirements are met. In particular, a valid employment contract, proof of self-employment or, in the case of inactivity, sufficient financial resources and comprehensive health insurance are required. Ultimately, however, the free movement of persons allows employers to recruit skilled workers in the EU/EFTA area quickly, flexibly and unbureaucratically. In addition, Swiss nationals also benefit from easier access to the European labour market.

Accepting the initiative would mean abandoning the dual system. The strict provisions of the Foreign Nationals and Integration Act would then also become the basis for the rights of EU/EFTA nationals as foreigners. In the light of the rules currently applicable to third country nationals, this would mean the following for EU/EFTA nationals in particular:

Compared to the law in force today, the more complex procedure would also mean that the cost of a work permit would be significantly higher.

Impact on Relations with the EU

The free movement of persons is part of the first package of bilateral agreements between Switzerland and the EU ("Bilaterals I"). It contains seven agreements linked by a "guillotine clause". This means that if the free movement of persons is terminated, all other Bilateral I agreements with the EU will also be terminated. The following areas would be affected: Technical barriers to trade; public procurement; agriculture; land transport; air transport and research. In addition, there is a risk that the EU could also call into question all other agreements with Switzerland.

If you have any questions or require further information, please do not hesitate to contact our Immigration Team.